We had the first Solar Eclipse travel across the United States since 1979 and at first, most people did not make a fuss over it but as the time approached, everyone started to ‘freak out’ that they must see it. I just wanted to avoid New York City that day and see it somewhere else.

I had a member’s invitation to see it at the American Museum of Natural History but I wanted to avoid the city today and that museum as I knew it was going to be packed and we would all be shoved into Rose Hall where the planetarium was located. It was not that I thought it would be done wrong but I did not want to deal with the crowds at the AMNH.

At the last minute, the Newark Museum in Newark, NJ (See review on TripAdvisor and my blog “VisitingaMuseum”) had a special function for the day where you could get the eclipse glasses and see the show. They did not know what they were in for as the crowd at the museum swelled into over 500 people. They did not have enough of anything for all the people that came. The line was still going on when I got to the front of the line. They ran out of glasses when I got there but they provided me with a ‘pin-hole’ paper so that  I could see the eclipse though the hole. I was lucky people were willing to share their glasses. 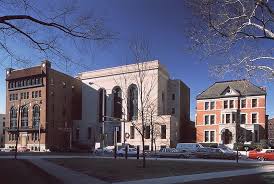 In New Jersey, we were so far from the path of the moon that we only got to see about 75% covering of the sun, so it was still bright out by us. So you really needed the glasses. It was so interesting to see the moon cover the sun and it moved ever so slowly. The display started at around 2:45pm EST and like I said you would never know it was happening because of the light of the sun. Some people said they noticed the difference but I didn’t see or feel anything different.

Horizon Plaza and the Garden area were mobbed with people from 2:45pm to about 3:30pm and they had the path of the sun and moon on TV on live stream inside the museum at the auditorium. I swear, the dopey things people will say on camera just to be on TV.

The reporters didn’t even know what to ask once it was over. Some people really got into it and most seemed to care less. I thought it was interesting to see this cosmic display. When it happened in 1979, I was in high school and I don’t even remember anyone talking about and thinking back to it, I think it was a cloudy day that afternoon.

This is a documentary by NASA

I left around 4:00pm when the path crossed and people got tired looking up. I could also feel the strain on my eyes. The nice part was I took the bus from home and did not have to tackle their parking lot. Lunch was at Central Restaurant, 30 Central Avenue, Downtown Newark, for an amazing meal (See review on TripAdvisor and my blog ‘DiningonaShoeStringinNYC’).

The next time this will happen will be in 2024 so we have some time and will travel from Texas to Maine. So maybe we will get a better view next time. Otherwise, I thought it was pretty awesome.

2 thoughts on “Day Eighty-Six: Traveling to the Newark Museum in Newark, NJ for the Solar Eclipse August 21st, 2017”