I continued my walk in Washington Heights in the middle of the neighborhood west of Broadway when the heavens opened up. Thank God it did not last forever. The sun did come out later that afternoon and did cool down a lot. It was the perfect weather to walk around the neighborhood.

I took the subway back up to 181st Street and walked past the rock formation again that abuts the surrounding buildings. I can’t believe that someone would want to blast this away to build something but it looks like its under construction. This is such a focal point in a neighborhood filled with pre-war apartments.

The street slopes  down and you have a view of Riverside Park in the distance, a tree lined street and the pocket park next to the dead end of Pinehurst Avenue. This is a perfect place to take pictures and climb the stairs to relax on one of the many benches that line the walkway. Toward the top of the stairs, the fence is lined with modern art that is festive and unique. As I said on a previous day, this part of the neighborhood reminds me of the marina area in San Francisco.

When you climb the stairs at Pinehurst Avenue, you are greeted by the Hudson View Gardens Apartments, a mixture of stone and Tutor apartments landscaped to match the adjoining parks. This attractive apartment complex lines the streets of the west side on Pinehurst Avenue, across the street from James Gordon Bennett Park, a staple that attracts families from all over the neighborhood. The courtyards of the complex are colorfully planted and match the stonework of the buildings. The whole affect with the park across street is quite striking. 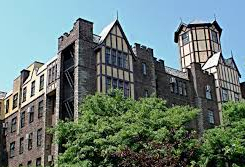 James Gordon was a newspaper publisher who launched the New York Herald in 1835. He donated this land which was part of his property. The land sat on the site of the original Fort Washington that had been part of the Revolutionary War battles. The park opened in 1929 and the unique aspect of the park is that is that the west side of the park site an outcropping of the ‘Manhattan Schist’, the layer of bedrock in which is the core of the island and how all the skyscraper’s are built on the island. This part of the schist is the highest point of Manhattan (Wiki).

I spent time in Bennett Park watching kids climb rocks, frolic around the playground and play with their parents, who were enjoying the park just as much as the kids. It gives me faith that raising children in New York City has changed over the last twenty years. I am seeing more and more young parents in the city staying put and bringing life back to New York establishing their roots here and not in the suburbs.

Bennett Park offers a lot. There is lots of equipment in the playground to keep any child occupied. There is a area for soccer, kite flying, rock climbing and even a cannon to climb on. Kids were flying planes, throwing balls with their parents or chasing one another without a cellphone in sight. That gives me faith in the next generation.

Leaving Bennett Park and walking up the length of Pinehurst Avenue, I stopped at the little triangle park to rest and take a phone call. The Paterno Trivium, at the corner of Cabrini Boulevard, Pinehurst Avenue and West 187th Street is another small pocket park run by the NYC Park system. It was a perfect place to converse with local seniors on the current status of New York City, happenings in the neighborhood and recommendations of restaurants on the small restaurant row on 187th Street. There is a little bit of everything in this area.

The Paterno Trivium at Pinehurst Avenue is perfect for relaxing

The park was named after Charles V. Paterno, a developer who was responsible for developing most of the Fort Washington section of Manhattan. He developed the Hudson View Garden Apartment complex, the Gothic apartment buildings near Fort Tryon Park in 1923-24. The park opened in 2000 and has become a Greenstreet site (NYCParks.org).

After walking both sides of Fort Washington Street and finished the upper western part of Washington Heights, I walked down 181st Street towards Broadway and made my way down Broadway to 165th Street following the western perimeter of the neighborhood.

Make note of this shopping district around 181st Street on both sides of Broadway which is loaded with reasonable restaurants and stores all along the street and down Broadway, St. Nicolas Street and parts of Audubon Avenue. It was especially vibrant during the holiday season when all the overhead Christmas lights were up.

I then walked around the Columbia-Presbyterian Hospital complex with dominates the 165th Street from Broadway to the Hudson River. All the housing surrounding the complex has been updated obviously for the staff of the hospital and in the later evening staff from the hospital was walking all over the neighborhood, conversing, walking their dogs and eating out.

There is a distinct change in the neighborhood once you cross 169th Street on Broadway. It goes from a Dominican neighborhood to a more college oriented one, lined with chain stores, upscale restaurants and gourmet shops and businesses catering more to the college and hospital staff then to the neighbors slightly to the north. Honestly though, I see plenty of young Hispanic professionals in the restaurants.

I had enough time to walk all the side streets between Broadway and Haven Avenue and the first three blocks up, the housing looks strictly for the hospital staff changing again around 172nd Street. I ended my walk for the evening walking the edges of J. Hood  Wright Park, watching everyone walk their dogs through the park and the last playground stragglers leaving the park for the evening.

The entrance to J. Hood Wright Park in Washington Heights

J. Hood Wright was a wealthy banker and financier who owned a mansion on the site and donated heavily to the local Washington Heights branch of the library (NYCParks.org). 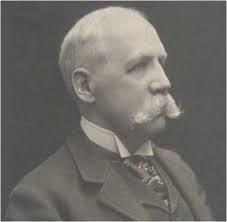 I stopped at La Nueva Empanadas Monumental at 3772 Broadway for some empanadas to munch on way back to the subway station. I had the chicken and cheese and the chicken. Not bad but a little doughy and be prepared to speak your broken Spanish if you unless you speak the language.

Most everyone is a Spanish speaker in the restaurant and some of the patrons seemed a little shocked that I walked in. To me, its a nice place for a quick, reasonably priced snack.

Their empanadas are really good!

I will be finishing the rest of this side of Broadway in the coming days.

At the corners of Cabrini Boulevard, Pinehurst Avenue and West 187th Street