I decided to take a long walk up Fifth Avenue from the Chelsea when I finished at Soup Kitchen today. I was exhausted from working in the prep kitchen again. I don’t know why I just don’t skip it and concentrate on the walk but I am very proud to say that I have achieved one of my goals there.

I got off to a late start on a somewhat gloomy day but it was still warm out and gave me time to really walk the border of the neighborhood. Since I had already done Fifth Avenue, both sides from East 59th Street to East 72nd Street, I decided to walk to East 72nd Street along Fifth again facing the park.

The park is finally coming to life after a cool Spring. It has been odd weather lately. It is either unbearably hot or cloudy and cool. We even had snow in parts of Northern New Jersey three weeks ago. That was really odd this time of year. Now that it is May, Central Park is starting to burst with color and the daffodils and tulips are coming out ahead of their New Jersey counterparts. Flowers always seem to bloom quicker in the park than in the suburbs.

I walked from Fifth Avenue across East 72nd Street past many of the buildings that I had seen before and even in a month, there are some new businesses opening up in the lower 70’s and more buildings slated to come down. As I had commented before, all of the Avenues of the Upper East Side are in a somewhat state of flux. You never know which block will come down next and be replaced by something else.

As I entered East 72nd Street to the end of the street by FDR Drive, it stops in front of those interesting brownstones painted black, which makes them stand out and the dead end with the scenic view and benches right by the hospital.  These interesting brick buildings built in 1894 were once tenements and renovated in the 1940’s. You have to turn around and go up two blocks to walk along the Promenade by FDR Drive. You have to walk up to East 74th Street get to the bridge to get you across to the walkway. 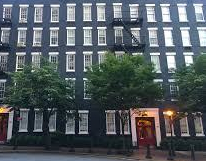 There is a small amount of sidewalk between East 74th Street and East 72nd Street but please don’t walk it! There is barely enough room to walk and you are about a foot from the highway and these cars zoom by. Don’t make the attempt! Just walk up the two blocks and you will walk twenty blocks of skyline on Roosevelt Island. On a beautiful day, there is nothing like the view of the East River as the boats pass by.

Once crossing the passage over the FDR Drive, you can walk along the East River on a beautiful day while admiring the buildings on Roosevelt Island. Once you reach the end of it, you are greeted by the ‘East River Roundabout’, a park that ends the walkway for now as the rest of the park project is being completed between East 58th and East 60th Streets.

Look up at the spiral structure above the park that was created by artist, Alice Aycock, an American artist known for her large metal sculptures and was an early artist in the ‘land art’ movement (Wiki). The ‘East River Roundabout’, her 1995 sculpture sits aside the Queensboro Bridge, shows much creative imagination and whimsical ideas of how space can used. Take time to follow the twists and turns, almost like a roller coaster was inspired by the artist’s love of Fred Astaire’s dancing of almost weightless motion.

The structure is part of the bigger complex of Andrew Haswell Green Park, which was dedicated to the city in 1994. The park represented much needed green space in this part of Manhattan. The park is currently in transition as there is more being added to it but after a long walk down the East River, it has nice benches and flowers and a good place to relax. The flowers were just coming into bloom so it look beautiful.

Andrew Haswell Green, whom the park is named after, was a 19th Century Urban Planner who among his many accomplishments was one of the key figures in getting such iconic tourist attractions as Riverside Park, Central Park, the Bronx Zoo and the Metropolitan Museum of Art and the American Museum of Natural History. He was even the inspiration for the 1898 consolidation of the five boroughs of New York (Wiki). I think that deserves a park being named after him.

The former heliport and  waste transfer station is becoming a thing of beauty in a much congested area of the neighborhood. As you walk down East 59th Street, you will see how the bridge twists and turns its way around the street. The is some beautiful art work attached to the bridge so try not to miss that. Just don’t try walking on the bridge side of the road as there is no sidewalk and I would not risk the traffic.

To your right starts famous Sutton Place, where most of ‘Old New York Society’ moved after all the old mansions came down. From a distance, you can see all the elegant apartment buildings. To the north of it, the ‘ever changing to new buildings’ York Avenue, in which blocks uptown is going through a building boom.

When passing Second Avenue and East 59th Street, you pass Tramway Plaza, a small park that leads to the Roosevelt Island Tram. This is a trip on a nice day you should not miss (See my review on it on TripAdvisor and on ‘Day Ninety-Five’ of MywalkinManhattan.com). The view is amazing especially the sky views as you enter Manhattan from Roosevelt Island. The views of the skyline are fantastic. 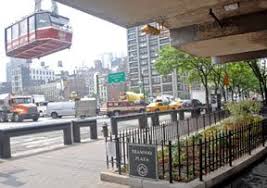 I had to stop at Bloomingdale’s on the corner of Third Avenue and East 59th Street for a bathroom break. It is one of the few places until you hit Central Park to go to the bathroom in the neighborhood.

The store has changed so much over the years but I still remember it as the place I had my first epiphany of what I wanted to do for a living. It was 1980 and I was a sophomore in high school and went with my mother and my family to see the “China at Bloomingdale’s” festival event. When I walked in the store and saw all the beautiful merchandise and Chinese dancers on the top of display cases, Chinese music and artifacts in the display cases, I knew I wanted to be in retailing.

The store no longer resembles that moment and in fact tries to be more like Saks Fifth Avenue. Still the store has a soft spot for me and I still love roaming the floors at the holidays. Plus they have several floors of public bathrooms and you don’t want to miss Forty Carrots, their casual restaurant on the top floor for frozen yogurt.

As I exited Bloomingdale’s, I walked the rest of East 59th Street to Central Park and then the length of Central Park West to Columbus Circle and back to Plaza Hotel the around the southern tip of Central Park. The weather started to get gloomy but I continued on.

Most of the livery cabs I passed were standing around gossiping with one another. They are getting more and more expensive. A ride for $100? You got to be kidding me. I am not surprised that the tourists are balking at this. You just don’t see them as busy as they once were.

I took the long trip now back up East 59th Street and walked back up the way I came, passing the all the sites but from the other side of East 59th Street. There are some interesting restaurants and shops I will have to explore while by the underneath path of the Queensboro Bridge. They seemed to have taken the underpart of the bridge and renovated it.

As I walked up the path facing the East River, I could see further up the river to all the areas I explored and though. I really have covered half the island at this point.

I reached East 72nd Street and with plenty of time to spare, I walked through Central Park and over to the Upper West Side. There were some places that I still wished to explore and I wanted to find that elusive brownstone by the American Museum of Natural History that I wanted to admire again. I found it at 233 West 83rd Street. Really admire the entrance way of the house.

To finish the day off, I visited Malachy’s Donegal Inn bar on 103 West 72nd Street (See TripAdvisor reviews and my blog “DiningonaShoeStringinNYC@Wordpress.com) for dinner. I had wanted to try the restaurant one more time before leaving the neighborhood. It was a busy night at the bar with the NBA playoffs and a room full of Boston ex-patriots cheering on the Celtics. I never knew what people from Boston who now live in New York City think of New York City. They were still talking about the Yankee-Red Sox games of 2004. Fourteen years still does not make a difference. It was a great series though.

I sat quietly in the corner eating my dinner. The one thing that I love about Malachy’s is that the food is so reasonable and they give you a nice size meal. I had their Chicken Fingers and Chips ($8.95 plus Cokes-two large breaded cutlets and about a pound of French Fries) which were really good but the chicken could have been taken out of the fryer amount thirty seconds earlier. Otherwise, I could just about finish my meal it was so big. With about five Cokes in me after about a five mile walk, I started to feel much better.  You can always feel the vibe of this bar. Just like ‘Cheers’, the regulars really do size you up.

The inside of Malachy’s bar

There’s a lot to see!

1 thought on “Day One Hundred & Ten: Walking the border of the lower part of the Upper East Side from East 72nd Street to East 59th Street from Fifth Avenue to FDR Drive May 5th, 2018”