I never realized that walking around Washington Heights would take so long but there is a little secret to the neighborhood. It isn’t flat! I have never walked up and down so many hills. This part of the island reminds you that hills and rock formations still exist on the island of Manhattan. You just don’t see them that much in Midtown.

I started my day just getting into New York City. The buses run so funny in the morning. Then it was a grueling day at the Soup Kitchen that I volunteer at some mornings when I am in the city. Holy Apostles Soup Kitchen was buzzing away today with a chicken curry entrée that had people coming back for thirds and fourths and we did not close until almost 12:40pm. Then it was the trip uptown. It does take a while to get to that part of Manhattan and as usual there were a lot of surprises that awaited.

When you get out of the A Train at 190th Street, the tunnel leading to the street on both sides has the most colorful street art on all the walls. Really take your time to look at the ‘tag’ work. This is now considered an art form in the city (as long as it does not disrupt or damage property) and you really have to look at the fringe neighborhoods, like Red Hook and Bushwick, for the inspirations. This tunnel shows a colorful display of street art that is actually allowed in the station and look to both walls and ceiling for the creative juices of many of these artists. The work is just amazing with colorful symbols and letter adorning the entire tunnel on the way out. 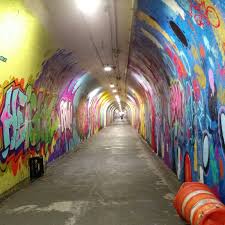 191st Subway Station is ever changing.

My walk today consisted of the entire lengths of the avenues in eastern Washington Heights. I walked the entire lengths of both Audubon Avenue and St. Nicholas Avenue and covered almost all of Amsterdam Avenue having to finally stop at 181 Street because it was getting dark and my feet were killing me. I walked both sides of the avenues from the tip of the neighborhood at 192nd Street to the border of the neighborhood at 155th Street. Needless to say, it was a long trip.

Audubon Avenue is more residential with many pre-war buildings that are in the middle of renovations or have already been renovation. St. Nicolas Avenue is more commercial with small businesses and street vendors filling up most of the storefronts along the avenue.

My first stop was Esmeraldo Bakery at 538 West 181st Street  (See review onTripAdvisor.com), a small hole in the wall bakery that offers an array of sweets and hot snacks. I enjoyed a beef and rice croquet, which are well-known in many of the Dominican bakeries I have visited in Washington Heights and a large twisted cinnamon sugar doughnut, which was a messy, sugary delight. For the price of $2.00, this gem of a bakery is a reasonable place to fill up on carbs for the long walk around the neighborhood. The service is super friendly and they speak both English and Spanish. Their selection is really good and take a few extras along the way.

Audubon Avenue offers some beautiful pre-war apartment buildings, many of which like the rest of the neighborhood are in the process of renovation. A lot of this neighborhood is under scaffolding. There are unique brownstones and townhouses to view on the way down the street in between the buildings. Yeshiva University sits in the low 180’s and this area during the day is dominated by college students and professors, who are milling around between classes and a lot of the businesses in the area cater to this population with many nice restaurants and stores. When classes let out in the evening, you are on a very business campus and would not know that you are still in Washington Heights.

Audubon Avenue stops at 165th Street to merge into St. Nicholas Avenue and a very busy shopping area. At the merger of St. Nicholas and Amsterdam Avenues, you walk past the C-Town grocery store to find the Sylvan Terrace, which is 20 identical homes that were once part of the entrance to the Morris-Jumel Mansion (See review on TripAdvisor.com), once home to Aaron Burr’s second wife, Eliza Jumel.

Sylvan Terrace was built in 1882 and was once part of the original Old Post Road from New York to Boston. The homes that now surround the street were built by James E. Ray between 1890 and 1902. The architect was influenced by the Queen Anne, Romanesque and Renaissance Revival influences and the homes are built with the Queen Ann style in mind (IloveWashingtonHeights.com).

These homes have been painfully restored back to their true glory and rumored to be going for about a million each. Their uniform painting and beautiful cobblestone streets leading to the mansion seem totally out-of-place with the rest of the neighborhood. So climb the stairs and enjoy the walk down the street. This pathway was once part of the East Post Road that lead to Boston. 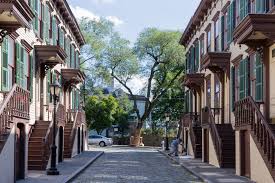 At the end of the block is the Morris-Jumel Mansion (see review on TripAdvisor & VisitingaMuseum.com), which was unfortunately closed the day I was there but I got to walk the ground and sit in the mansion’s colorful garden that had yet to give way to the fall season. There was still a bit of summer left in that afternoon and it was nice to enjoy it walking the flowery paths and stone benches. It has a great view of the river and the neighborhood below as this area was once the summer and weekend homes of the wealthy downtown when upper Manhattan was still considered the ‘wilderness’. Another version of this you can see at the Gracie Mansion in the 90’s which I will also see in the future.

Take some time to stroll these paths and then walk around the Jumel Terrace Historical District, which is lined with turn of the last century apartment buildings and classic brownstones that are starting to be decorated for Halloween. They have a classic Edith Wharton look to them. This neighborhood is an oasis for the rest of the area and is tucked into this small three block radius. I took some time to really see how everyone had renovated their homes.

As you walk out of the Historical district, at 157th Street, you end up in a dead-end street with the picturesque Bushman Steps, a staircase that leads to Edgecombe Avenue and the very edge of High Bridge Park. On a sunny afternoon, this little park offers much refuge to the warm afternoon and a beautiful view to boot. This pocket park really makes the street pop and gives it a feel of ‘Old New York’, lined with trees and flowers.

At the end of 155th Street and St. Nicholas Avenue, there is a series of unique brownstones at various stages of renovation. This row of brownstones are in various stages of renovation but like the rest of the area will be highly desirable in the future. These homes really stick out amongst the more modern buildings. My goal to 155th Street was complete as another more modern building is on the other side of 155th Street showing that many changes are happening in this area.

On the way back up St. Nicholas Avenue to the other side of Audubon Avenue, the schools were letting out and students and parents alike to converging to the bakeries and fast food restaurants that line the area. My next stop was at El Manantial Bakery at 325 St. Nicholas Avenue (see review on TripAdvisor) for pastilitos  and a guava empanada. The pastilitos were filled with both chicken and beef and the guava empanada was filled with a guava jelly that all were really good. The pastilitos had just been fried and they had that juicy greasiness that something gets right out of the fryer. Make sure to order the beef ones. You will need a snack by this point. I only spend about $3.25 for two pastilitos, one pastry and a coke. Quite a steal!

The walk up and down St. Nicholas you will see one of the most active shopping districts that will compare to 207th and 181st Streets. So many things can be bought and sold on this avenue. Some of the most interesting street vendors are located between 180th to 187th Streets selling ices, pastilitos, fried pork, fried pastries, dolls, books, household appliances and even Christmas ornaments. People were out in droves when school let out and many children were begging their parents for a snack. This can be a very active Avenue with many interesting restaurants to try in the future. St. Nicholas Avenue buzzed with activity from one end of the avenue to the other, especially as you arrived back at the hospital point by 168th Street. Columbia Presbyterian is taking over all the blocks at this location, changing the demographics and buildings.

I revisited the area again during the Christmas holiday season and this neighborhood is very lively with all the restaurants and stores in full swing. The area is also nicely decorated with light displays and music. There are a lot of nice restaurant and shops to choose from along the 181st Street corridor from Broadway to Amsterdam Avenue.

My last part of the walk took me up and down the Amsterdam Avenue, which as it gets dark can get quite gloomy with its industrial feel to it. Parts of the it by High Bridge Park both by Fort George Avenue and between 181st and 170th Streets can be pretty, for the most part gentrification has left this part of the neighborhood alone.

By the time I rounded 155th Street and arrived at 181st, it was starting to get dark and my feet and legs were ready to give out. Even the snacks did not help as I started to get hungry and with the dark started to come the fall cold nights. I have a lot more to walk in this neighborhood but just as much to explore.