Okay, I did not make my goal of walking the whole city by the end of the Summer but when work, book edits, fire and ambulance calls and life in general get in the way, there is not much you can do but keep on walking. I started my walk today at the 165th Street subway station. At least I am moving down the subway lines.

Exiting the subway, I took the long walk down Broadway towards 155th Street to 153rd Street the traditional border of Washington Heights and Harlem. For all the reputation that these neighborhoods have to the rest of the city, they are really nice especially west of Broadway by the Hudson River. I concentrated on the west side of Broadway today, making 153rd Street my border until I start the eastern part of Broadway. At 84 degrees, the Summer has not let go yet and it was a beautiful sunny day to venture into the city.

I started down the hill on 153rd Street at the Trinity Church Cemetery, which is advertised at the ‘only active mausoleum’ on the island of Manhattan. By the time I got into the city at 3:30pm, the cemetery was closed for the day, but people were still walking around the sides of it, jogging, walking, biking and just enjoying the day.

By the wall on Broadway, I read a plaque that said this was the line of defense for General Washington against the British during the Revolutionary War. Many people forget how much Manhattan played a role during the war. If General Washington were only to see the neighborhood now, he would be pretty shocked. That is just about the sticker price on an apartment in the area as this area is getting more costly.

As I walked this section of Broadway, I ventured into the Sweet Life Pastry Bakery at 3887 Broadway for something to munch on to keep the sugar high. I had one of their fresh Concha pastries that is a type of sugary sweet cake. For a dollar, it quite a bargain for this red topped sugary pastry. 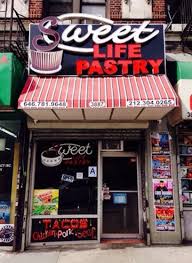 Venture inside for many other delicious sweets. Munching on the cake and walking around the other side of the cemetery at 155th Street, at the end of the street there is a series of steps that takes you to a set of stairs that leads to a small patch of Riverside Park with the most breathtaking views of the river and Fort Lee, New Jersey.

It’s nice on a sunny day to take in the view and the way the sun shines off the water and the river rushing by creates a very inviting and relaxing place to take in the views of the park. I sat and watched the joggers, bikers and people just walking and talking pass by enjoying their afternoon. Then it was back up the steps to continue up Riverside Drive.

As I walked down the side streets between Riverside Drive and Broadway, there are many pockets of small sites to see and enjoy. At the end of the stretch of 158th Street, there is a row of townhouses with different designs, all sitting in various stages of renovation, with a few still boarded up.

There are not many places in the city where you are going to see much of this. I was pretty surprised that two or three were still in bad shape. I don’t give it that much time before someone passes these homes and snatches them up for a new home. Still, they look genuine. Like the people that live there have seen the good times and the bad times of the neighborhood.

At the start of corner of 157th Street and the beginning of Riverside Drive at 811 Riverside Drive, there is the most unique home sitting next to an apartment building with similar architecture, but it looks more like a Gothic house that was once someone’s mansion until it was turned into apartments. This now two-family house looks almost like a frat house but kept in the utmost care. It is worth the wait to stare at from the street.

The house was built in 1922 for clothing manufacturer, Nathan Berler and was supposed to be part of a bigger development of duplex homes. It was the only one that ended up being built. This unique home sits amongst the buildings known as the Audubon Terrace (Untapped Cities).

Another is a pocket park on Riverside Drive West which mergers into Riverside Drive. What I have found is that when these communities ban together, they can create small, picturesque parks for all the neighbors to enjoy. Their form of community gardening has created a place for seniors and their caregivers to relax and kids to run around in without fears of cars. It is a nice place to sit on a bench and watch the world go by. The start of Riverside Drive off 158th Street and Edward Morgan Place offers another beautiful patch of hilly park space on two levels of stone wall with a staircase in between.

Many people were sitting on the wall chatting away enjoying the day, not noticing the trees still in full form and several brownstones with potted plants and window gardens decorating their fronts. These colorful displays accented the brownstones’ and almost brought the park to the front of their homes. A black cat followed me up the street, my first companion on this walk. After a block, it meowed and walked back down the street.

I walked all the side streets between 158th Street to 164th Street, admiring the pre-war buildings and watching the families outside setting up tables and chairs and talking to their friends and families or just playing dominoes or cards. These folks seriously pay attention to what is going on around them. My walk up and down Riverside Drive will complete this side of Broadway in Washington Heights.

I stopped one day to visit the Hispanic Society Museum & Library at 613 West 155th Street (see my reviews on TripAdvisor & VisitingaMuseum.com) on one of the rare days that it was open. It is a wonderful place to admire Spanish art from different eras. Take time to admire the murals towards the back of the museum and then some of the Medieval art in the middle of the museum. 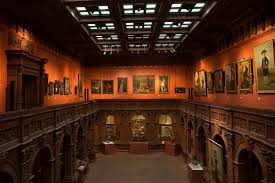 Please read my other blogs on walking Washington Heights. It was a big area to cover:

Day Seventeen: Walking the border of Riverside Drive in Washington Heights from 181st to 153rd Streets:

Day Nineteen: Walking the East side of Broadway from 193rd to 155th Streets: