Thanksgiving was an interesting experience as I celebrated for my second time in New York City. My best friend came in from Michigan to spend time with me while her son’s former high school band performed at the Macy’s Thanksgiving Day Parade. I don’t know the whole status of global warming but it was an unusually warm Thanksgiving week. It was a four day treat to be in New York City with a place to sleep.

I know I skipped from Upper Manhattan to Lower Manhattan but it was nice to play tourist when given the opportunity. Spending a week in New York City with a bunch of tourists from Michigan is interesting. They traveled as a pack and did not want to leave the group. I had to drag my best friend away from these people so I could really show her the city. We had a great time.

For the record, my best friend, Kris, I have know since my first week as a freshman at Michigan State University and has been one of my best friends since I was 17 years old. Since that time, this was only the second time she came out to visit me. We saw the city through a series of tours and our own travelling around.

Our first night in Manhattan was watching the musical “Aladdin” with a bunch of high school students and their parents. It was bad enough to be on the top tier of the theater but we were also squeezed into seats that were made for people who are about 5.5. We were packed in like sardines. I could see that most of the kids enjoyed the show as well as the parents. Frankly I preferred the movie.

Our place of residence for the week was the Holiday Inn Express on West 36th Street see review on TripAdvisor) and I highly recommend the hotel when visiting New York. It is centrally located near Macy’s and the 34th Street shopping district and by the subway route that can take you anywhere you want to go in Manhattan. 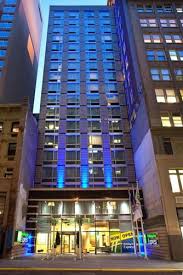 The rooms are small but well-appointed with a large bathroom and shower area which was relaxing itself and the beds were so soft and firm that I got the best night’s sleep for the whole trip. Their breakfast buffet in the morning was excellent. Some of the best eggs and sweet rolls that I had in a free buffet and there was plenty of food each morning. 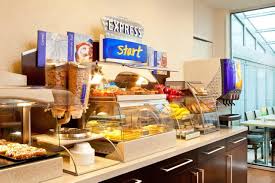 The hotel had the best breakfast buffet

Our day of touring started on the Wednesday before Thanksgiving when we took a group tour with parents of the high school band group Kris was touring with during that week. Most of these people had never been to New York before and it showed in the way they behaved. You would think some of these people had never been to a city before even though Detroit is not far from their homes. Everyone acted so wide-eyed.

Our first stop was in lower Manhattan on the Circle Line out to Liberty Island. My word of advice when visiting Liberty Island is to climb the statue if you have the time. This is the main reason to visit the island. Walking around and taking pictures and then visiting a gift shop is not getting the whole feel of the island.

Our next stop was Ellis Island (see review on TripAdvisor). Plan at least three hours plus lunch if you are visiting the island. There is so much to see and do in the main building.

First off, do not miss the Wall of Immigration names outside the main building. I showed Kris many of my family members whose names were on the wall. The Wall was a major fundraising effort by the Ellis Island Foundation and it proved so popular with people wanting to put their ancestors name on the wall that they had to build a second wall.

After a 45 minutes lunch and seeing the orientation movie (which I had seen before on my many visits to the island), we did not have much time for anything else and we took the boat ride back to Manhattan.

Our next stop was the 9/11 Museum and Memorial (see review on TripAdvisor). I had been to the museum before and if you really want to have your emotions tugged at you, visit the 9/11 Museum. It is run by the same woman who had run the Holocaust Museum in Washington DC and has the same emotional power. It would be too long to describe how you might feel when visiting the museum but it is something you should not miss.

The pools where the footprint of the old buildings are just as emotional in the 9/11 Memorial garden. Really take time here to reflect on what happened that day and say a prayer for these victims. They have made a very somber event rather cheerful and the park reflects that.

Our last part of the all day tour was going to the top of the of One World Trade to see a view of the city. One World Trade is the tallest building in the Northern Hemisphere and the view from the top proves it. Since we did not get there until 7:30pm, it was dark and the building was quiet. We had the most amazing view of New York and the surrounding area.

When I say it was the most spectacular view is an understatement. You could see all the way into New Jersey and clear out to Coney Island. If the amusements were up and running this time of the year I am sure I could have seen them. It was nice to walk around and see all the views from every angle but avoid the over-priced gift shops. They will really rip you off in this building.

The view from One World Trade Center

We concluded the evening with a drink at One Mix Bar (see review on TripAdvisor), the bar restaurant at the top of the One World Trade. It has the most breathtaking views, a creative cocktail menu and a very standard dining menu. Have a drink here but don’t bother eating dinner here as the menu is not that creative and very expensive.

We got back to the hotel around nine and just relaxed. It had been a long day of touring and we both wanted to get to bed early to watch the parade the next day.

There is nothing like seeing the Macy’s Thanksgiving Day Parade live. It was quite a site. This is the second time I have been in New York City to see the parade in person. This is after seven years of participating in the parade as a Macy’s employee from 1988-1994, first as a balloon handler then as a celebrity escort.

It was a beautiful day for the parade, warm, sunny and clear and I could see perfectly the view from where I was standing to the parade route, which was a half block from the hotel. The hotel was right around the corner from Macy’s Herald Square.

It’s nice to be on the other side of the parade by watching it. The floats have not changed much over the years and the balloons seem like old friends to me especially seeing Ronald McDonald, which I held in 1989.

The one thing I felt bad about is that the Walled Lake Marching Band just walked by us and probably only performed for a few minutes by the store before having to march on by.

The worst part of the parade is that either I am getting old or not with it but did not recognize any of the celebrities on the float with the exception of Pat Benitar and Mariah Carey. Either I am not watching enough TV or these kids are just blending into the social fabric.

After the parade was over, it gave Kris and I a chance to walk around the city and see Central Park. We did get a chance to see the zoo the previous day but also to enjoy the wonderful weather.

That night was a Thanksgiving buffet cruise around the lower part of Manhattan with the most spectacular views of the skyline and a ride around Liberty Island at night with the statue lit up in all its glory. Now that alone was some site. The lower Manhattan skyline is just spectacular at night with its sweeping views. I was impressed that for being on a tourist cruise that the Thanksgiving dinner was that good. The only problem was that the staff did not replenish the food that quickly and the families looked like they were ready to riot. That was a real problem as people wanted seconds.

When we got back from the dinner cruise and before we went to bed, Kris and I made the fatal mistake of going to Macy’s at 11:45pm at night. The place was a mob scene even this late at night. Everything was 60% off and people were buying like merchandise had just been invented. Everyone had bags in their hands and you could not even walk down the aisles it was so mobbed. After seven years with the company and working in the buying offices for four of them, I never thought the Union would allow the store to open on Thanksgiving but here is was and it looked successful. We had to fight the crowds back and this was after midnight.

Our last day in the city, we went to Central Park to hear the band play. The impression I got was that the New York Philharmonic had invited the band to play with them in the Band Shell in Central Park. In reality, the band played four songs including their fight song to a crowd of proud parents and groups of New Yorkers passing by who rolled their eyes every time they asked a parent of the band what was going on. The look said it all, “Isn’t that quaint that a Midwestern band is playing in our park”. I have been coming into the city since I was three and could pick up on that.

We spent the rest of the afternoon touring Central Park, seeing the zoo again, visiting the ‘Alice in Wonderland’ statue. seeing Cleopatra’s Needle and then touring the Metropolitan Museum of Art for the rest of the day. I just wanted to show Kris the best the city has to offer.

I had to check out early to help with Christmas Tree sales for the Men’s Association on Saturday morning, so it was a quick breakfast and then the bus ride home. It was nice to experience a Thanksgiving in New York City and will have to visit everything again in more detail but it was a nice overview of the parade and all the tourist attractions in Lower Manhattan.

Top of One World Trade

My review on TripAdvisor of the One Mix Bar:

Open: Hours vary so please call or check their website

1 thought on “Day Twenty-Eight-Thirty One: A New York Thanksgiving November 2015”