Halloween has never meant ‘Trick or Treating’ to me.  Even as a child, I was bored with it by the sixth grade and did not want to go out for it anymore. I liked it better when I got to college and was able to be on the entertaining part of it. I would assist other student government leaders in entertaining small children during the holiday.

As an adult, I still assist with the Hasbrouck Heights Fire Department on the town’s Rag-a-Muffin parade and the holiday party over my years as a fireman. What I enjoy the most is volunteering for the Annual Halloween Parade in New York City and seeing the magic of a parade come to life.

For the last three years, I have worked with a very distant cousin of mine through marriage, Mark Schuyler, whose family married into mine (the Beekman family) about 150 years ago so hence I tease him and call him my cousin. Over the past few years we have assisted in getting performing groups in the parade to where they are supposed to be and keeping the wondering tourists and demanding New Yorkers out of the parade staging area. I can’t believe how many people feel because they live in Manhattan that they are ‘entitled’ to enter the parade staging area to watch the parade come to life. We have too many people to attend to and we are ‘working’ even in volunteer form.

My ‘cousin’, Mark Schuyler and I at the gate at the Halloween Parade

Watching the magic of our founder, Jeanne Fleming, as the parade gets bigger and more creative by the year, you can see the countless hours that so many volunteers put into making this parade special. I am a seven year Alumnus of the Macy’s Thanksgiving Parade (with my seven years as a Macy’s executive in the Buying Offices) and know what it takes to organize a parade. This is more of a ‘peoples’ parade as the people who join the parade whether in a group holding puppets, performing in a band or waving on a float, these costumed participants are what make this parade special and add that spark to how real people mold this parade into what it has become. 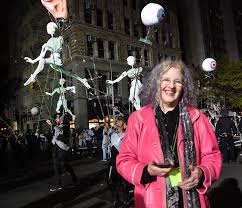 Jeanne Fleming, our fearless leader at the Halloween Parade NYC

It is always an exciting night. We must have had a good group or I am just used to people trying to pull one over on me that I found it easier to get people in and out of the parade route. They will tell you every story to get in and no one wants to pay attention because we ‘know nothing’. I love when the answer always ends with ‘but I am a New Yorker!’ Great everyone, so are millions of others who know the rules of parade route. We are lucky to have the NYPD with us the whole time. A beefy police officer walking towards you usually ends the conversation.

When we finish our duties of getting all the talent to where they need to go, around 7:30pm, I get to see the rest of the volunteers work their part of the magic. You should see how the volunteers and the NYPD keep the order of thousands of people in costume walking in the parade and how it is coordinated with floats and marching bands. It is quite a feat. I have never seen people have more fun marching in a parade and showing off the creativity of their costumes or just enjoying the evening with family and friends. The parade route just keeps getting deeper and deeper every year as the reputation of the parade keeps getting bigger.

What really makes the Halloween Parade successful is the people who are participate. The thousands of New Yorkers, residents from the surrounding states and the foreign tourists that add their enthusiasm and sense of excitement of either watching or participating in the parade. I talked with people all night and it seems tourists from all over the world came downtown to see the parade. Even little kids came down dressed up for the evening who might not celebrate Halloween in their country.

Because I have to work the parade, I get to see the staging area of the parade on Sixth Avenue and I got to see the last of the floats and bands head uptown. The evening had been rather warm for Halloween Day but as it wore on it did get cooler and I could not believe some of the costumes these Caribbean and Brazilian groups were wearing on a cold night. It was not the tropics outside and I did not know how far some of these women were going to go before they had to put a coat on.

As the last of the bands heading uptown around 9:00pm, there were still hundreds of people in costume waiting to walk the parade route. It was cool but not cold that night but some of the people in costume I knew would not last long walking uptown. They were just not dressed for a cool New York night. Some of the costumes I did see really sparked with creativity from members of the books “The Wizard of Oz” and “Alice in Wonderland” to the casts of “101 Dalmatians” and “Star Wars”, some showed the time and effort of getting ready for a one night event. Others were standard but original costumes from cowboys and Indians to robots, witches, Demons and cheerleaders. Each one adding their own charm to the event.

Our last part of the evening for the crew of the parade was an after-party that one of the production company’s had for us. It was in a very nice loft near the NYU campus and I was not sure how many people they were expecting but one tray of ziti and one tray of ravioli is not enough for the hundred people that came through that night. We were all exhausted and cold from being outside all night.

This is my third year of working on parade and I can tell you it is never dull and gets more exciting every year.

This is the parade in 2016. I give the YouTube contributor credit for this video. I was working that day.