On a beautiful sunny day in Washington Heights,  I finally finished my travels up Amsterdam Avenue from 181st Street to the corner of Fort George Avenue. My first stop was McNally Plaza as I crossed the street to start the walk up Amsterdam Avenue. The park and its fall foliage was beckoning. McNally is a small park right by the Washington Bridge leading to the Bronx.

McNally Plaza Park is named after World War I Corporal Richard J. McNally, who lived in the neighborhood and was killed at the end of the war in September of 1918 (NYCParks.com). 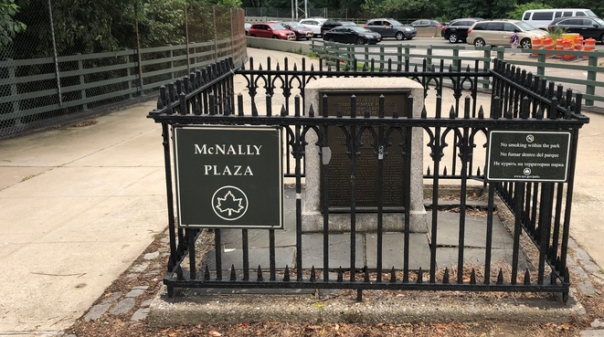 I don’t recommend taking a walk on this busy bridge but for a short distance it offers the most amazing views of the East River and of the foliage in High Bridge Park below. You can see the few joggers and bicyclists below that had finished their day at work. The rolling hills remind me of my travels in Inwood.

As I walked up Amsterdam Avenue, I passed by the Washington Heights Expeditionary Learning School (Wheels), that was letting out for the day. There is the most amazing street vendor just out side the school who makes freshly fried pastilitos  and croquet’s filled with beef, cheese or chicken. She is located just outside the door to the school at 182nd Street and try to catch her before she leaves the school area. You can pick up a nice lunch for about $3.00 and her beef pastilitos are the best.

As the kids were leaving for the day, there was a superhero performance that some outside vendor was putting on for the kids and they were truly engaged by the performance. They had the kids singing and dancing right on the street to the amusement of all the parents who looked happy for the distraction. I forgot what is was like to be in elementary school and have time to just relax and have fun. It may not have been the best performance but the actors  knew how to relate to the kids and it was fun to watch.

The George Washington School at the tip of Amsterdam Avenue was letting out for the day, so when I reached the top of the avenue there was a swirl of activity. The students swarmed all the local businesses to socialize with their friends and have snacks. When school let out for the day, this is a very busy area. Their are about five public and three private schools in the area and after school the kids keep themselves occupied with hanging out at the local parks or outside popular businesses in the neighborhood.

My first stop in the neighborhood was an ice cream parlor that is a popular hangout Rincocito Ice Cream at 1650 St. Nicolas Avenue that I had passed many times in this part of the neighborhood. It is located by the convergence of all the avenues starting points to the north. I had a delicious ice cream named ‘Perry’s Birthday’ which you have to try when you visit this neat little shop. I had it in a fresh waffle cone and it is a combination of birthday cake and cotton candy ice creams. For $2.50 for two large scoops, it was quite the deal and hit the spot on this unusually hot day.

After my snack started my long day of walking down the streets, starting at 193rd Street, one of the shortest streets in the walk to all the way down to 181st Street. It was walking on both sides of the streets criss-crossing the avenues. There was quite a view of High Bridge Park from Laurel Hill Terrance that abuts Yeshiva University. The fall foliage is in full glory in the park at this time and try to get into the park before the array colors is gone. Many of the students from Yeshiva and the local schools were using the park and the playgrounds in droves, enjoying the last warm days of the summer that crept into fall. Lauren Hill Terrace gives you such a nice view of the park. 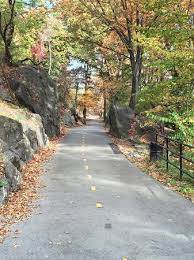 As I criss-crossed most of the streets, they are lined with beautiful pre-war buildings with less activity then in the past. As the weather has cooled, I don’t see as many people on the street either playing dominoes or conversing in fold-up chairs. Still there were lots of kids milling around talking to their friends.

On 182nd Street, there was a small grouping of brownstones that were out of place with the rest of the block. The residents had them beautifully decorated for Halloween with all sorts of spider webs, skeletons and hay/corn stalk displays. They did a good job putting me into the Halloween spirit. They were entertaining a group of people who were dressed like they were getting ready for a party. 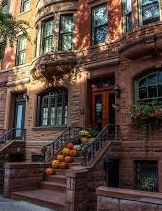 By the time I reached my goal of 181st Street, it was nightfall with the bustle of a street teaming with activity. Since this is a major shopping block, the stores were bustling with activity. There are loads of interesting street vendors to choose from selling all sorts of hot snacks, from roasted pork, hot soup, pastilitos, croquettes, ices and soft tacos there is a never ending choice of freshly cooked food that is made right in front of you. These vendors line 181st Street between Amsterdam and Broadway.

My day ended at the Morgan Library at 225 Madison Avenue at 36th Street for a screening of ‘Nosferatu’, the silent German version of ‘Dracula’ made back in 1922. The screening was packed on this pre-Halloween night with patrons who enjoyed the musical performance during the film. Between the foliage in the park, the decorations around the city and the movie, it put me into the spirit of Halloween.