Have you ever experienced a parade in 19 degree weather? I just did. Today was the Annual Chinese New Year Parade in New York City and I spent the morning watching the parade travel down Mott Street, the heart of New York City’s Chinatown. There was a large crowd for such a cold day.

The worst was the night before it was 0 degrees outside with a wind chill factor of 10 below. I felt like I was sleeping in Alaska. The breezes were the worst as the heat was on in the house and still it was cold.

We lucked out with the weather as it was a beautiful sunny day outside and at least when the sun hit, it started to get a little bit warmer. For a parade that was standing in a refrigerator, it was fun. The sights and sounds of the music as the lion dancers performed their dances. The contestants from the ‘Miss Chinatown’ contest were waving to the crowds with much enthusiasm.

It was not a particularly long parade. The parade was mostly made up of Chinese businesses, Lion Dance groups and small bands. The parade was lead off by the NYPD Marching band and honor guard and by members of the Asian Jade Society, the Asian version of the Vulcan Society or the many organizations for Italian or Irish NYPD members.

What surprised me was how young they all were, mostly in their 20’s and 30’s leading me to wander when the first wave of Americans with Chinese decadency entered the NYPD. The oldest person their was a detective that looked about my age and I really wandered what his career must have been like in the late 80’s or early 90’s with the NYPD. The rest of the members were these fresh faced guys who looked right out of the academy while this guy looked hardened from years on the job. It is amazing what years on the same job can do to a person.

The atmosphere was electric as with every passing float poppers filled with confetti and streamers were let off and confetti flew over the whole parade. I heard so many different languages in the crowd especially German and French, I wondered how many New Yorkers ventured down for the parade. 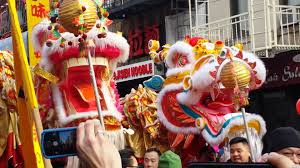 The parade ended with many floats for the airlines and one last lion dance that included four different colored lions. I was impressed on how long this parade goes. It just does not go down Mott Street and ends. It goes up and around Chinatown going up East Broadway to the other side of Chinatown that has creeped into the Lower East Side. What has thrown me is how much of this neighborhood has gentrified in the last five years.

As I walked the streets on the edges of Chinatown, I am fascinated by how fast SoHo, Nolita, NoHo and the East Village have morphed and changed and have gotten more upscale pushing more into this neighborhood. So I decided to explore it and I toured all around the Bowery, a street that when I was a kid was a dump! And it had always been a dump until recently.

I have never seen such a swift change in a place in ten years. I remember walking up the Bowery which stretches from Chinatown to about West 4th Street near Cooper Park. The area around Chinatown is slowly changing in that their businesses are there to stay as long as the population stays but it starts to give way by about Kenmore Street, which also pretty much ends ‘Little Italy’ over by Mulberry Street. Even ‘Little Italy’ doesn’t exist the way it did when I was a kid. That neighborhood is pretty much five blocks by a block.

The lower part of the Bowery is small restaurants, small businesses such as transportation companies and lighting companies. This slowly gives way to the first wave of galleries, hip restaurants and spas. Once you pass Kenmore Street it really begins to change. From Kenmare to West 4th Street, like the rest of the neighborhood, a lot of this has been knocked down and rebuilt with luxury housing and chic new stores. In some cases I can see how the first wave of ‘hip’ stores have given way to even more expensive stores as the neighborhood has gotten more desirable and more expensive. Who knew that the Bowery was someplace that people really wanted to live?

No walk around Manhattan could be complete without something to eat. Having to rush into the city on a Sunday is never fun but we got into the city rather quick and I always start my day off in Chinatown with baked roast pork and crème buns at Sun Sai Gai at 220 Canal Street (see reviews on TripAdvisor & DiningonaShoeStringinNYC@Wordpress.com), one of the most traditional and cheapest places to eat in Chinatown right on the edge of the original Chinatown. It is a dumpy place that used to cater to mostly locals and workers in the local businesses but over time has its share of tourists as well.

They have the cheapest and most delicious buns for sale for around a dollar. I always go for their baked roast pork bun and when I sit down for lunch, I love their Roast Pork plate with fried rice. So good and so reasonable. What I always get the impression at is that the people who work there wonder why so many tourists are coming there. I guess they don’t read TripAdvisor. 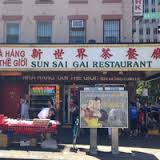 After I walked both sides of the Bowery and will take guesses of when gentrification will get to Canal Street (I give it about two years not even), I found that all the restaurants were still packed with people especially in the heart of Chinatown so I decided to try someplace brand new and went to New Style Handpulled Noodles at 23 Pell Street (see review on TripAdvisor). What a nice meal. It is a small place that must be brand new because it was not even in the review books. 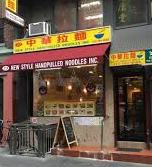 I had their pork soup dumplings which were freshly made and just excellent. They just burst in your mouth with a sweet pork flavor and to warm me up their roast duck and pulled noodle soup. The noodles were freshly made and the broth really warmed up every part of my body that was cold. The place was just starting to empty out when I got there and was half empty when I left. Everyone else seemed to like the food as well.

For something sweet, I came across the Double Crisp Bakery at 230 Grand Street (see review on TripAdvisor), which I had passed on my way back down from walking the Bowery. They had this raisin what they called a “top”. It was just a sweet bun covered with a sugary top with raisins for a dollar (most everything there was a dollar) but I munched on this sweet, sugary treat while I was walking back to the subway. Another great find! 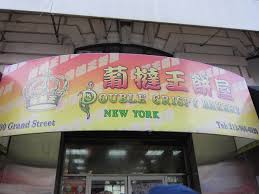 My walk will find me back in this next of the woods at this rate in a few months where I will revisit all these places, but for now it was a nice side trip while watching the parade and watching the neighborhood in another state of transition.

My review on my blog, “DiningonaShoeStringinNYC@Wordpress.com”: