I took time out from my walk in Manhattan to run a second special event for the Friends of the Lodi Memorial Library. We celebrated this Friday the 13th with a special retrospect of showing the original uncut version of the 1980 classic film, “Friday the 13th” starring Betsy Palmer and Adrienne King. This was the second special event I ran since joining the Friends in September.

We opened the retrospect with a talk on the film, followed by the uncut original film. In today’s terms, this film is rather tame in comparison to some PG-13 films and video games which I think are much more graphic. In its day though, this was a real eye-opener in film making and introduced the 80’s to the genre along with the movie ‘Halloween’ to the slasher  film.

We set up a complete concession stand with movie candy, various snacks and chips and beverages to the audience. It was a special treat to many who had never seen the film and managed to jump at the right times.

We ended the retrospect with an interview with Don Stein, a local Lodi resident who was a Scout Master at Camp No Be Bo Ca (North Bergen Boy Scout Camp) thirty five years ago. He told our YouTube audience about his time with helping prepare the camp for the filming and assisting the producers with the sets. What was interesting about the interview is how he described how the storm scenes were done with the Blairstown Fire Department shooting water all over the set and rocking the  vehicles to make them look like they were going through the storm. You can see the whole interview on YouTube. 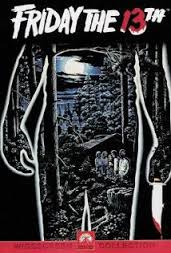 The movie “Friday the 13th”

We had tried to get an actor who was in the film to come out and talk to the crowd about their time on the film but Melissa Merindino (Betsy Palmer’s daughter), Marc Nelson and Peter Brouwer all turned us down. It seemed to be the consensus of the actors that they did not want to have an association to the film anymore. Some like Adrienne King embrace the film and promote it. I respected their thoughts and feelings toward the film even though we would have loved to host any or all of them.

Justin Watrel giving the introduction to the film

We were able to interview that evening local Lodi residents, Donald and Marie Stein after the filming. Don Stein, the President of the Lodi Senior group, was a Boy Scout Master the summer of the filming of the movie and talked with us about his time helping the film crew on the set. He and others Scout leaders helped the Boonton Fire Department with some of the scenes. Although he did not meet any of the actors personally, he talked about how the film was made and his time on the set. Please see the the YouTube video ‘An interview with Don Stein at the 35th Anniversary of the film “Friday the 13th” at the Lodi Memorial Library’ on the Lodi Memorial Library Video Library.

Overall it was a big success to those who attended and I hope you access the video on YouTube “Friday the 13th” at the Lodi Memorial Library and my interview with Lodi resident Donald Stein, who worked on the film helping the Blairstown Fire Department when he was a scout master at Camp NoBeBoCo (North Bergen Boy Scout Camp) in 1979.

Justin Watrel’s introduction to the ‘Friday the 13th” 30 Anniversary Retrospect:

After the movie was over, we had the discussion with Donald Stein but the movie is what people came for. This is the introduction to the film. It is still scary after all these years.

Part One of the Movie “Friday the 13th”

The Making of “Friday the 13th”

I hope you enjoy our retrospect. It was a lot of fun.

Articles on the Friends of the Lodi Memorial Library: