I took time out of my walk in Manhattan to run another event for the Friends of the Lodi Memorial Library. The Friends had planned a series of Fall events around the theme “Follow the Yellow Brick Road Back to Your Library”, to encourage residents of Lodi to come back and see the changes at their library and in celebration of the 116th Anniversary of the novel “The Wizard of Oz”. In celebration of the books anniversary, we invited Miss New Jersey 2016 Miss Brenna Weick to join in the celebration.

Miss Weick is a 22 year old college graduate from Mantua, New Jersey. She earned a BS in Psychology with a minor in Communications from High Point University. She is the recipient of a number of scholastic awards including the High Point University Academic Achievement Award Scholarship and the Alpha Gamma Delta “Strive for Pi” Academic Excellence Award. She was the recipient of both the Miss New Jersey and Miss America Community Service Awards and earned the Bronze medal for participation in the Duke of Edinburgh program through the Miss America Organization.

This delightful afternoon started with a reading from the novel “The Wizard of Oz”, with Miss Weick reading to an audience of over 60 children and their parents. She read several passages on the trip to Oz and some of the background stories of the main characters.

The reading was followed by a Q & A on Miss Weick’s role as Miss New Jersey and being an ambassador of the Miss America Pageant. She also engaged the audience with her time at the recent Miss America Pageant in Atlantic City. It was interesting to learn how the pageant worked, the experiences she had meeting all the other contestants and her role at the pageant as the home town favorite.

She also talked about the work she is doing all over the state with her platform “A World of Difference: Navigating the Cybersphere”, where her aim is to teach generations (young and old) how use the Internet safely and with integrity. She has utilized this platform to host seminars for parents and senior citizens in an attempt to bridge the gap that has been created with the growth of technology.

Miss Weick, in keeping with the theme of the event sang “Over the Rainbow” to the audience. Miss Weick had played the role of ‘Dorothy’ in her high school production of the ‘Wizard of Oz’ her senior year. It was a delight to the whole audience and everyone enjoyed it. We also asked if she could sing the song that she sang at the Miss America pageant ‘Someone like You’ from the musical Jekyll & Hyde. Her perfect rendition of the song brought the house down with a loud applause from the audience.

Patricia Licata, Brenna Weick and Justin Watrel at “Celebrating Books: the 116th Anniversary of ‘The Wizard of Oz’

After the program was over, Miss Weick stayed and signed autographed head shots from the pageant and “Wizard of Oz” books that the Friends were selling to raise money. She was engaging to residents and Friends of all ages.

The afternoon was followed by an light reception in Miss Weick’s honor that everyone was invited to that was sponsored by Shoprite of Lodi and we ended the afternoon with a showing in the upstairs screening room of the 1939 version of “The Wizard of Oz” starring Judy Garland.

It was a wonderful afternoon to everyone who attended and the Friends got many compliments about the event. Hats off to Miss New Jersey 2016 Miss Brenna Weick who is representing the State of New Jersey with grace and dignity and being a true “Friend of the Library”.

Brenna Weick singing “Over the Rainbow” to the crowd

Think about joining the Friends of the Lodi Memorial Library.

The video presentation of the wonderful afternoon on YouTube.

Check out Articles on the Event and others for the Friends of the Lodi Memorial Library:

You have probably wondered why I have not been as active on my walking project. I joined the Friends of the Lodi Memorial Library back in early September and immediately started a project (on top of many others) an event called “Celebrating Books: 150th Anniversary of ‘Alice in Wonderland’. Below is the press release from the event. Check out our pictures and videos on YouTube shortly. It was a great event that many people including many of us ‘big kids’ enjoyed:

Miss Giannini read an excerpt from the first chapter of the novel as Alice discovers the white rabbit and chases him down the rabbit hole. This was followed by a Question & Answer discussion on the novel by Lewis Carroll with the audience made up of many elementary and junior high students from Lodi. Miss Giannini discussed her love of the novel as a child and the influence it had on her growing up. She then engaged the crowd on how she became Miss New Jersey and her path to the Miss America competition this summer. The audience was fascinated on what it took in pageant competition to become Miss New Jersey.

After the Q & A, Miss Giannini asked for participation from the audience on a series of magic tricks (Miss Giannini is an amateur magician) and had the children and the adults performing magic tricks for the audience. She even had one parent participate on the time it takes to get distracted while driving and texting. Even the parents understood after the program how difficult it is to do two things at once. 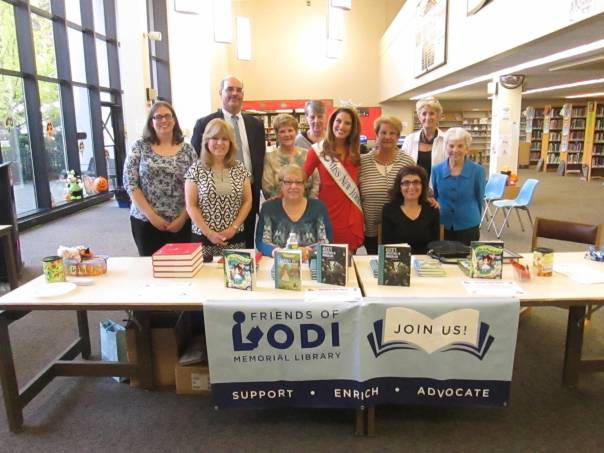 Miss Giannini’s platform for the competition is “The Dangers of Distractive Driving” and her participation in advocating in the hearings as part of People Against Distracted Driving became “Nikki’s Law” and was signed by the Governor in 2013. “Nikki’s Law” requires signage and variable message signs to warn against distractive driving. These signs are available in 17 states and 3 countries. Miss Giannini is a Junior at Rowan University with a 3.9 GPA in Broadcast Journalism and has received the Broadcast Pioneers of Philadelphia Scholarship, the Rowen University Trustee Scholarship and the President’s Education Award for Academic Excellence. In 2014, she was recognized by the Miss America Organization with a National Community Award. In 2015, she was named “Children’s Miracle Maker” by the Miss New Jersey Organization for being the contestant who raised the most money for Children’s Miracle Network Hospitals, one of her passions.

After the Q & A and the magic tricks, Miss Giannini joined the crowd in picture taking with none other than Alice herself joining in with the fun. One of the Lodi teachers joined in the fun by dressing up as Alice to entertain and take photos with the audience. Miss New Jersey was presented with a proclamation from the Borough of Lodi by Deputy Mayor Patricia Ann Licata and an Honorary Membership to the Friends of the Library by President Judy Schroeder. An autograph session followed as the Friends of the Lodi Library sold copies of “Alice in Wonderland: to raise money for the library. Even the Lodi Women’s Tennis Team took a break from their match with Hawthorne High School to join in the fun. After that, everyone joined in a special “Tea Party” with foods from the book including cookies, fresh fruit tarts, freshly sliced fruits (lots of pineapple), fruit juice and water. 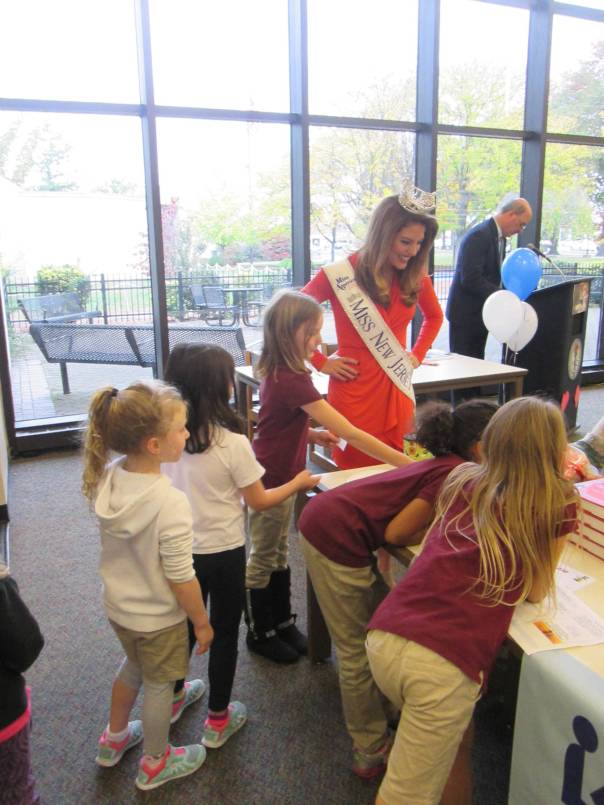 Refreshments were continued upstairs as the crowd settled in to watch a double feature of the 1903 Silent version of “Alice in Wonderland”, the original film that was set to music. Most of the patrons had never seen a silent film so it was a treat and the second film was Disney’s “Alice in Wonderland” starring Katherine Beaumont. It was a wonderland afternoon for those who were there of great food, engaging conversation, enjoyable movie watching and the excitement to meet Miss New Jersey 2015 Lindsey Giannini, who set by example the true meaning of community spirit through service. The Friends of the Lodi Memorial Library and the Lodi Memorial Library want to thank everyone who attended.

Enjoy this two part video of Lindsey’s visit to the Lodi Memorial Library!

The Disney version of “Alice in Wonderland”

The original 1903 silent version of “Alice in Wonderland”

One of the most beautiful songs from a version of ‘Alice in Wonderland’, “Can You Hear Us, Alice”

We got recognition from Web Junction in 2015 for the event through Facebook:

Articles on the event from the Friends of the Lodi Memorial Library: